ONCE MORE, WITH FEELING

For these empty nesters, moving back to the city meant returning—with pleasure—to modernism

In 1957, a brassy young beverage entrepreneur moved into 910 N. Lake Shore Dr. (designed by Mies van der Rohe and completed in the mid 1950s). “It was the building then,” recalls the now-retired businessman. “The rent was $235; other buildings in the vicinity were $100. I was living high on the hog.” He filled his pad with sleek Dunbar pieces from the Merchandise Mart and, not long after that, found himself a gorgeous, smart bride . . . who didn’t much like the idea of his modern furniture inside the traditional home she planned to raise her family in.

“I was a young mom; I wanted a formal home. I didn’t get the modern stuff,” explains the wife, who certainly gets it now. With help from Stoneberg & Gross Architects and Jessica Lagrange Interiors, she recently oversaw a gut rehab of her and her husband’s Lake Shore Drive sequel-an expansive, minimalist space that, other than its formidable square footage, is a complete departure from the traditional Oak Brook manse (complete with a tennis court and swimming pool) where she raised her three children.

Dotted with reproductions of the very mid-century classics she once nixed (by Mies van der Rohe, Eames, and Saarinen, among others) and mostly understated staples from Holly Hunt, it’s a paean to modernism. “I guess you could say I’ve come back to where I started,” says the wife.

But the couple’s home is not so much about furniture as it is about space. Having lived on five acres for many years, they were accustomed to spreading out. While they loved their three-bedroom condo’s lake views, east-facing balconies, and west-facing terrace, they knew that someday they would purchase the apartment next door and create their dream city-nest. That day came a few years ago. The whole process, from planning to finish, took about 18 months.

“And now,” says the couple’s decorator, Lagrange, “they have a 4,000-square-foot two-bedroom!” Indeed, the current master suite is a decadent merger of all three of the bedrooms in the original apartment (the his-and-hers bath alone is the size of one bedroom). The common area, which includes a living room, dining area, and family room, is a generous 1,800 square feet; the entryway serves as a gallery for large-scale works by Harry Bertoia and Laddie John Dill. Meanwhile, the guest wing-which includes a private, all-white mosaic bath, a bedroom with two twin beds, and a pony skin–upholstered Le Corbusier chair in one corner-is relatively small: “I didn’t want a lot of guests,” the wife admits.

Overnight guests, that is. Because while this retired executive may not be fond of slumber parties, she’s certainly up for a dinner party any time. “We entertain a lot and we have a big family, with seven grandchildren, so I needed room for a big table, and room for a kids’ table,” she says. “We also needed a buffet area and a bar.”

There are needs . . . and then there are tastes. She never liked the way buffet tables look. Nor, come to think of it, did she like hinged doors or conspicuous baseboards or vents. “I don’t like things that stick out and interrupt lines,” she clarifies. She also wanted a fireplace where there wasn’t one and bathrooms where there was no plumbing. In short, her contractors had their work cut out for them.

But when you have a vision, you have a vision-and nothing is more essential when you’re starting from scratch. “The fact that she knew exactly what she wanted actually made her a very easy client,” Lagrange says. “We were just there to help her figure out ways to make it all work.”

Lagrange solved the buffet table dilemma by wrapping a back-painted glass ledge around a central wall bank that contains the condo’s mechanicals and laundry room. The ledge, three feet across in some places and as little as four inches in others, faces the living/dining area, allowing the couple to set out a buffet when they need it but blending into the decor when not in use. It ends at the wet bar, which is tucked away near the kitchen-a standard, high-rise galley design, which Lagrange opened up by cutting out a pass-through window that overlooks the family room.

What might have been a blight on the whole scene, an unmovable pipe (a main stack for the building), became an architectural flourish. “We clad it in patinated bronze and created a decorative capital and base plate to make it look like an intentional part of the buffet’s design,” says Lagrange. Another subtle but effective touch: The center bank is built at a slight angle, so “the formal space gradually narrows as you move toward the more intimate spaces, like the family room and bedroom suite,” Lagrange says.

Keeping the bedroom private presented its own challenges, as it’s located on the only wing that has access to the rooftop terrace, and the couple often uses that outdoor space for entertaining. Lagrange’s solution was to install a room divider made with sliding translucent panels to separate the private part of the bedroom from a more public sitting area that opens onto the terrace. A double-sided entertainment unit housing back-to-back plasma TVs sits between the two sets of sliding panels, which close when the party begins.

The bedroom itself, painted a muted beige, is the very image of serenity and absence of “things that stick out,” just the way the wife likes it. Pocket doors disappear when not in use; closet space is hidden behind doors that, when closed, are hardly distinguishable from the walls. And the room is furnished with only the bare essentials: a low, leather-upholstered bed, side tables, and a chair, all by Christian Liaigre.

Meanwhile, the master bath, a side-by-side his-and-hers with small openings near the vanities and a sliver of open space along the wall between the showers, just might be the recipe for maintaining a successful 48-year marriage: “This set-up allows us each to have our own space, but still be able to talk easily when we want to,” says the wife.

“Yeah, and it turns me into a window washer after every shower,” quips her husband, referring to the fact that the showers have no doors and his wife has a very strict squeegee policy. Oh, the things we do for love-and uninterrupted lines.

The terrace, situated above the building’s garage, is well suited for parties; it’s also great for relaxing, as the owner does here. The Sutherland furniture is from Holly Hunt, the landscaping by Botanical Concepts. 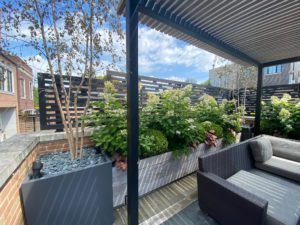 11 Ways to Use Your Chicago Rooftop Deck

In this blog post, we will explore some of the different ways that you can use your Chicago rooftop deck. Whether you are looking to add value to your home or just want a place to entertain friends and family, a rooftop deck is a great investment! 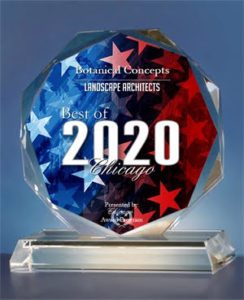 Botanical Concepts has again been selected for the Best of Chicago Award in the Landscape Architect category by the 2020 Chicago Award Program. Thank you to all of our wonderful clients for making this another winning year!

We’d love to hear from you

Schedule a consultation. It's completely FREE.